In the menu, the heading 'About' contains the following options:

This menu contains a full list of all available documents in a module. From here, users can access an overview page for any document anywhere in the module.
Under the heading "About", all meta information is given for the document: a description of the physical document, information on who made the transcription, on the holding library and if there were any revisions to the transcription since it was first published.
Thumbnails give a general overview. A document can be browsed in more detail in a linear transcription ("Text view"), or in an image viewer. The "Image View" includes the following:
(only applied in Stirrings Still/Soubresauts and Comment dire/ what is the word)

3. Leaf through the notebook 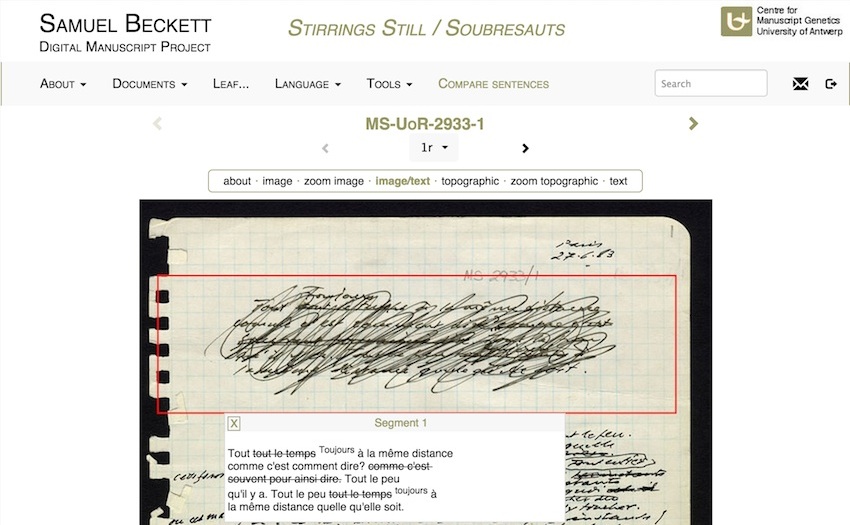 In all views that include the transcription, two new items appear in the menu: "Tools" and "Compare sentences". 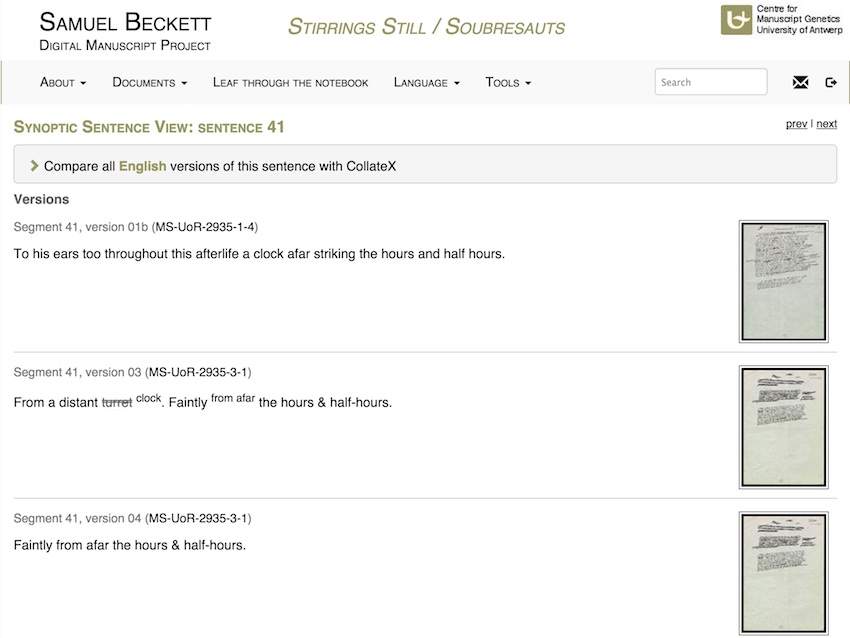 In a box under "Synoptic Sentence View", users are given the option to: "Compare all English [or French] versions of this sentence with CollateX". This link lets the third party software program "CollateX" perform a collation of all versions.[2] The result is a table in which the versions are aligned and the variation highlighted.
Users can determine which versions they wish to compare and go to the relevant scanned page of any version.

The XML encoding of all primary source materials can be accessed from this link.

The search engine offers full-text searches of all the transcriptions and notes. The results appear within the context of the sentence in which the search string was found, with the search string highlighted. Searches can also be finetuned to include only occurrences within the two most prominent features of manuscripts: additions and deletions. The search engine makes use of Elasticsearch.
As an extra, a number of potentially interesting searches are suggested, such as 'intertextual references', 'dates', 'doodles and diagrams', 'gaps' or 'transpositions'. They can be run by selecting them from the dropdown menu under 'Suggested searches'. The search for 'Intertextual references', for instance, calls up allusions to passages by such authors as Shakespeare and Dante (and corresponding annotations).

[1] Stirrings Still / Soubresauts has a complicated genesis, and many different versions. Although the catalogue numbers reflect the chronology of versions, only the chronology of UoR MSS 2935/3/11, 2935/3/12, 2935/3/10 and 2935/3/9 differs slightly from the order suggested by the archive numbers, some documents (in Stirrings Still / Soubresauts notably the 'Super Conquérant' Notebook, UoR MS 2934) contain more than one version of a particular passage. The versions in this document are not successive, since Beckett made alternate use of this notebook and loose sheets of paper. In the case of Beckett's penultimate text, the writing of the three sections that eventually became Stirrings Still (sections 1, 2, and 3) was preceded by three abandoned sections. To distinguish them, the abandoned sections are identified by a zero preceding the number ('before Stirrings Still', sections 01, 02, and 03).
[2] As part of the InterEdition Project, CollateX is a Java-based collation software package that can be used to produce a critical apparatus for digital editions. <https://collatex.net/>